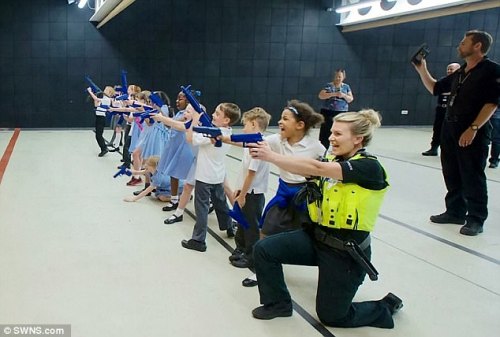 The above ‘photo was taken a few days ago when, according to the Independent,

A school trip to a police firing range where pupils took aim at targets with toy guns has been criticised on social media.

Pictures from the visit show a line of pupils, aged seven and eight, aiming plastic replica firearms at targets metres away.

I could, if I was so minded use this as a way to comment upon in both the decline in police numbers and the cut in central government funding of the police. As evidence for this, I might cite the Institute for Fiscal Studies recent analysis of police funding and it’s key findings that;

Spending on the police fell by 14% in real-terms between 2010–11 and 2014–15. Central government grants for the police fell by more (20%) but some forces were able partially to offset the cut by raising more money through council tax.
At the autumn 2015 Spending Review the Government planned further cuts to central government grants for the police up to 2019–20. It was planned that if police forces each chose to increase the council tax precept by the maximum permitted then their budgets would remain constant in cash-terms between 2015–16 and 2019–20.
Current estimates of police force revenues in 2016–17 show that the government has done as they promised so far: Police budgets remained broadly flat in cash terms between 2015–16 and 2016–17. However, this does mean that in real-terms revenues have continued to fall.

I could do that. Of course I could. I could also use it to highlight the fact that politics is all about choices, and that it is all well and good Teresa May praising the police after a terrorist incident, but her warm words are not much use to pay for anything in the real world. Unless she’s invented a new kind of virtual reality currency, rather like Bit Coin, only Bitch Coin. So instead of denominations of pounds, one might have instead increasingly descriptive words for warmth to denote value. So a lukewarm might be worth only five tepids and a tepid only worth five cools. The most valuable being of course the centre of the sun, but that wouldn’t ever be used – not even by Russian oligarchs – but for most people it would instead be boiling.

Anyway, being puerile, my immediate thought on seeing this picture was this scene from ‘The Hangover’.