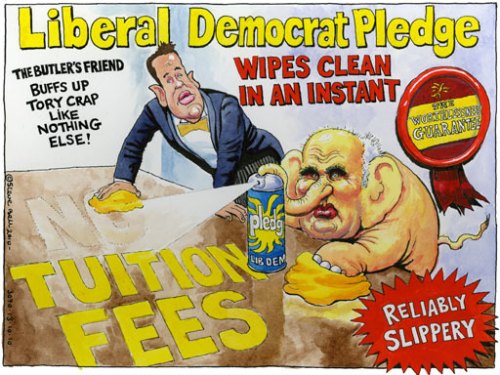 I’ve always been highly suspicious of the Liberal Democrats and it’s a suspicion that they’ve proved to be fully justified. When they knew they had no chance of ever constituting anything approaching an effective political force, they promised all manner of things to woo the electorate. They were like the ‘Goldilocks’ of British politics, inasmuch as they were like the Conservatives but not the Conservatives and they were like Labour but not Labour. They were something different – which was important when your trying to impress your middle-class friends that you too were different – although what exactly that difference was, wasn’t quite clear.

They were partly defined by what they weren’t. They had beliefs, but not what one might call a central unifying one, one that could be summed up in a sentence and was elegantly simple. The Conservatives, for example, are pro-business, pro minimal regulation pro-monarchy, pro-privatisation. Labour are pro-workers rights, pro-trade unions, pro-welfare state, and pro-state intervention for the common good. But the Lib Dems?

But whilst they had successfully managed to inveigle themselves into the electorates collective consciousness as the decent political party, all of that credibility that they’d built up over the years, was exposed expedient posturing in a quite breathtaking act of political opportunism. After the 2010 general election, no one party was able to form a majority government. Some hurried negotiations took place, which saw many Lib Dem manifesto pledges being jettisoned in ‘the national interest’ of having to form a coalition government with the Conservatives.

‘National interest’ was what Nick Clegg claimed he was acting in, but as it turned out, he was acting in political self-interest, and the Conservatives used the Lib Dems craven shamelessness like political Teflon. They weren’t reduced to just a handful of MP’s after the 2015 election, were they? The most embarrassing example – at least the one pledge that they felt compelled to apologise to the electorate for reneging on – was the pledge not to raise tuition fees. Naturally, someone put that apology to music.

So one treats the news that according to the BBC,

The Liberal Democrats have put a second EU referendum at the heart of their general election manifesto saying it would “give the final say to the British people”.

The vote on the final Brexit deal would include an option to remain in the EU.

The Lib Dems also say they could generate £1bn from legalising and taxing cannabis.

with the large pinch of salt it deserves. It’s not as if they’ve got a track record that inspires confidence and besides manifesto pledges aren’t even worth the paper they’re written on – as they not legally binding. Unless their manifesto is re-cycled of course. They’d like that. Although not if it was as toilet paper. Thinking of these manifesto pledges – I’ve downloaded their manifesto, so will post about it soon – brings two things to mind.

The first is the old joke. Why did Nick Clegg cross the road? Because he said he wouldn’t!

And the second is from the incomparable genius that is Chris Morris. It’s less than four minutes long so enjoy!